Joshua Moore was due to partner Goshen at Wincanton in place of his brother Jamie, who is still recovering after fracturing his sternum and back in a fall at Fontwell in August.Gary Moore reports his son to be progressing well – but when asked if Jamie could be fit to ride at Ascot, he added: “That will be the doctor’s decision, not mine or Jamie’s.“He’s doing fantastically well, but you’ve got to respect a very serious injury like that.”- Advertisement – Goshen was one of three not declared for Wincanton’s feature race, along with Ballyandy and Song For Someone – which leaves six contenders including Paul Nicholls’ Solo, who reappears following a disappointing Cheltenham effort back in March.A 10-length winner of the Adonis Juvenile Hurdle on his British bow at Kempton in February, Solo could finish only eighth in the Triumph Hurdle at the Festival.He is the pick of stable jockey Harry Cobden, leaving Bryony Frost to team up with Nicholls’ other runner Diego Du Charmil – who was third on his return at Kempton last month.Master Debonair was an impressive winner of an Ascot Grade Two on his third hurdles outing last term, but Colin Tizzard’s charge has been off the track since disappointing in his Festival prep run in February – with connections deciding to head straight to Aintree, which was subsequently cancelled due to the Covid-19 pandemic.Sceau Royal won this race in 2016 and is back again for Alan King, with victory in the Welsh Champion Hurdle at Ffos Las already in the bag this term.Teqany won twice in September but was a length and a quarter behind Diego Du Charmil when fourth at Kempton, with Neil King’s Brandon Castle completing the line up. 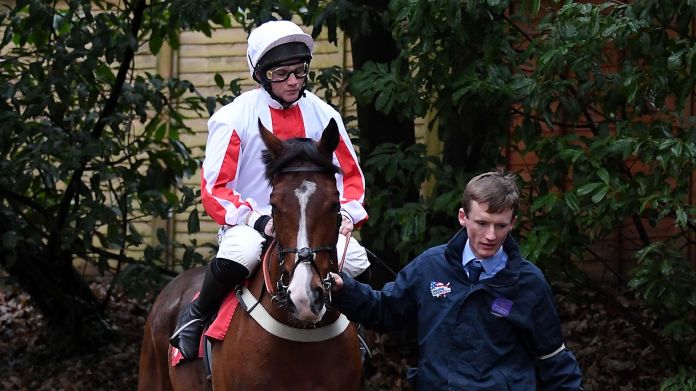 Goshen could be rerouted to Ascot later this month after a combination of unsuitable ground and an imperfect scope ruled him out of the Unibet Elite Hurdle at Wincanton.Trainer Gary Moore had earmarked Saturday’s Grade Two as a first outing over obstacles for Goshen since his unlucky unseating of rider Jamie Moore at the final flight when in a commanding lead in the Triumph Hurdle back in March.- Advertisement – Goshen has had two outings on the Flat in recent weeks. But the Wincanton ground – which is described as good, good to soft in places – and a minor health issue means the four-year-old may be seen next in the Coral Hurdle at Ascot on November 21.He said: “The ground wasn’t ideal, and everything with the horse is fine – but his scope wasn’t perfect, so we will get that right now.“It’s nothing serious, and we’ll have a look at the Ascot Hurdle.”- Advertisement – – Advertisement –